Enter your email to stay in the loop with Reach Out and Read Greater Philadelphia!

Under her leadership, CHOP medical providers (pediatricians and nurse practitioners) have given out more than 1.8 million brand-new and gently-used books at well and sick visits through CHOP’s Primary Care Centers. Reach Out and Read is currently implemented at 20 CHOP Primary Care Centers located in Northwest, West and South Philadelphia, the Pennsylvania suburbs (Broomall, Chalfont, Coatesville, Drexel Hill, Kennett Square, Media, Norristown, Pottstown, Souderton, Springfield, West Chester and West Grove), and Burlington Township, New Jersey and also at six CHOP neonatal follow-up programs and one cardiac developmental follow-up program. In 2000, Dr. Haecker was instrumental in obtaining funding from the John S. and James L. Knight Foundation to expand Reach Out and Read to the eight health care centers of the City of Philadelphia’s Department of Public Health. This expansion laid the groundwork for the creation of Reach Out and Read Greater Philadelphia.

Dr. Haecker’s outpatient practice focused on the comprehensive care of children born prematurely. She has vast experience with chronic medical conditions, developmental delays and care coordination and has written extensively in the area of medical and developmental care of young children in foster care.

Dr. Erkoboni leads efforts to promote early literacy and learning through parent-child interaction in an increasingly digital age. She is the Principal Investigator of the Literacy Lab at Children’s Hospital of Philadelphia, and since 2020, Associate Medical Director of Reach Out and Read Greater Philadelphia. Through this work and other diverse research initiatives, Dr. Erkoboni has partnered with multiple community-based organizations and stakeholders, including Temple University’s Child and Infant Lab, the Free Library of Philadelphia, Reach Out and Read Greater Philadelphia, and Read by 4th (Philadelphia’s Campaign for Grade-Level Reading). Dr. Erkoboni is additionally collaborating with many of these organizations to bring playful learning environments to clinics and other community spaces throughout the city of Philadelphia.

Dr. Erkoboni is an assistant professor at the University of Pennsylvania, a faculty member of the PolicyLab at Children’s Hospital of Philadelphia and a general pediatrician at CHOP Karabots Primary Care Center, Norristown. She completed a fellowship in the National Clinician Scholar Program (formerly the Robert Wood Johnson Clinical Scholars) at Penn, where she received a Master in Health Policy and Research. Dr. Erkoboni participates on a number of local and national committees, including as a member of the Read by 4th Leadership Council and a member of the Council for Early Childhood of the American Academy of Pediatrics. At home, she is a mother to two young girls; her favorite children’s book is Click, Clack, Moo by Doreen Cronin. 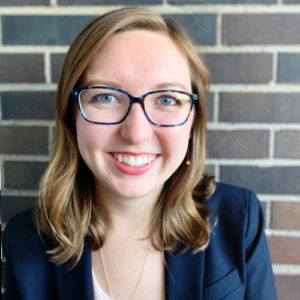 Katie Lane is the Policy Manager for Reach Out and Read based at PolicyLab at Children’s Hospital of Philadelphia. In this role, Ms. Lane is responsible for the development and execution of a public policy strategy that promotes the sustainability of early literacy promotion across Pennsylvania. The William Penn Foundation funds this three-year, statewide advocacy effort.

Prior to joining Reach Out and Read in 2020, Ms. Lane was a graduate student at Harvard T.H. Chan School of Public Health studying social and behavioral science. While working towards her degree, Ms. Lane was an intern in the Office of Government Relations at Boston Children’s Hospital, a summer fellow in the Community Health Improvement Department at the Cambridge Health Alliance, and a part-time associate with the Bloomberg Harvard City Leadership Initiative.

Earlier in her career, she was a senior business analyst at Truven Health Analytics in their Federal Health and Human Services Division in Washington, D.C., where she supported projects with the Centers for Medicare and Medicaid Services and the Centers for Disease Control and Prevention.

Ms. Lane is passionate about improving the health of children and families, particularly as it relates to equity and social drivers of health. She attended Franklin & Marshall College where the double majored in public health and Spanish as well as Harvard T.H. Chan School of Public Health where she earned her master’s degree in public health.

Sarah Kerrey assists the Reach Out and Read Greater Philadelphia Affiliate Leadership with many aspects of the program, such as book donations, social media, special projects, and community events and outreach.

Prior to joining Reach Out and Read in May of 2022, Ms. Kerrey worked in Arizona for the Phoenix Public Library and First Things First as an early literacy specialist, where she led early literacy programs for caregivers and children, promoted library services and delivered free books to families with young children.

At home, she is the mother to three children, whose favorite books are: The Color Monster, The Miraculous Journey of Edward Tulane, and the Harry Potter series.